This encryption we just did was not very secure because used the same key over and over again. To make our encryption more secure we should use a unique key and not the one which is repetitive in nature. A good technique that could be used is One-time Pad. This makes the encryption much more secure to the brute force attack.

The encryption and decryption using XOR has the same code. A python implementation for the same is below:

And here’s a sample run

A block representation of ROT13 encryption and decryption

The encoder and Decoder for ROT13 is the same because there is no special logic during decoding since the shift for both encoding and decoding is the same. Below is the python code for the implementation of it. The code is pretty much the same as Caesar Cipher with the shift value set to 13 always.

Here’s a sample run of ROT13

Base64 is a binary to text encoding technique rather than an encryption technique but I thought it made sense to cover it in this series because it is widely used especially for transmitting the data over the wire. The reason being the set of characters selected for this encoding is a subset of most common characters in all encoding and printable characters.

Here is the Base64 index table:

The conversion of a string into Base64 happens by taking the 8-bit binary equivalent of the alphabets and then slicing it into 6-bit unit since the maximum value in the Base64 is 2^6 and then using the index table like above binary would be represented. Lets take an example of string Sun and see how it would be represented in Base64

We can verify this by converting the string with Python

The newline character that we see at the end of the output is ignored. Whether we decode the string with or without the we would still get the same string back

The length of characters in the output has to be a multiple of 4. If it is not the case then the output is appended with either one or two “=” to make it so. For example when we convert Earth to Base64 we this in action

Sometimes for various reasons the strings are Base64 encoded multiple times and you might have noticed by now this increases the length of the output. The base64 encoder that I wrote using the one builtin with Python takes the number of times you would like to encode your string. The code is pretty straightforward.

And here is a sample run

This a where it gets a little bit trickier since while decoding I assume that I am not aware of the number of times the text was encoded. I created a base sting that contains all the valid characters in Base64 encoded strings and then take the input as base64 encoded string

With the string to be decoded in hand we go into a while loop and run in it until we have a potential candidate for the original string. The basic logic is to try and decode the string and if fails to decode then append an “=” to its end and try again and also increase the error count in the process. We repeat this twice and keep going until we have a string that cannot be decoded. 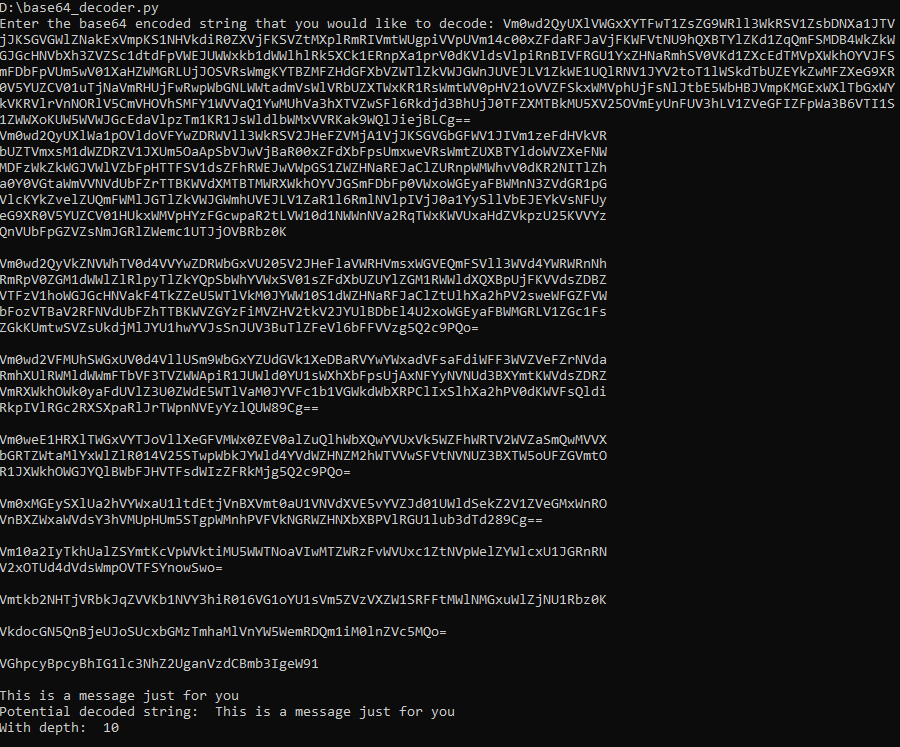 The problem with the current approach is that if we might over decode the string that are one word only. One fix to that could be reaching out to reach out to an online dictionary and see that we have found a valid word.

If you have ever been interested in cryptography or started to learn about it then there is a high probability that you would have come across Caesar Cipher. In case you haven’t, here’s how wikipedia explains it

In cryptography, a Caesar cipher, also known as Caesar’s cipher, the shift cipher, Caesar’s code or Caesar shift, is one of the simplest and most widely known encryption techniques. It is a type of substitution cipher in which each letter in the plaintext is replaced by a letter some fixed number of positions down the alphabet. For example, with a left shift of 3, D would be replaced by A, E would become B, and so on. The method is named after Julius Caesar, who used it in his private correspondence.

In this post and further posts this series we would implement these encryption and decryption in Python.

This part of the algorithm is fairly straight forward. The code below asks the plain text that you like to encrypt using the Caesar Cipher and the number of alphabets that you would like to be shifted.

Finally it outputs the ciphertext for you to use.

I am assuming that you have either already have python installed on your system or you would do it now. To encode your message using Caesar Cipher save the above code in a .py file and then int the command prompt navigate the folder where the file saved and run the command similar to below:

Just like hiding something is simple and finding it is difficult. Similarly encoding is much simpler than decoding it. Now assume that you encoded your message using Caesar Cipher but then you forgot how many character you actually shifted. In this solution we would go through creating a solution for deciphering the ciphertext for all the possible shifts and then using the Oxford dictionary API to check which of these output actually makes any sense.

The initial section of the code is straightforward. We would ask for the ciphertext and your guess of what the shift could be

And here’s the a sample output

We all understand the concept of boxing and unboxing in C# but type casting is a bit more complicated and we do have more than one option to accomplish it.

The two options that we have is 1) Have an explicit cast  to specific type or 2) Use the as keyword for type casting. Let’s look at each one of those in a little detail in code

I am going to call the type casting without any keyword as standard type casting.  Below is a code example of one of the ways of doing it right.

It is apparent from the code that the object we are trying to cast to typeof Person is not actually a person and hence will be unsuccessful, so we are prepared for it by catching the InvalidCastException. This is exactly the problem when using the standard type casting.

We can avoid getting an exception during type casting by using the as keyword. Below is the code example of one way of doing that

As we can see from the code above, we used the as keyword to type cast and since the obj1 was is not of the type Person we will get back null as the result of the cast.

I know. The next question one would ask as to why is better than catching an exception since it is almost the same amount of code?

The answer to that question is performance. It is always expensive to throw an exception because of the additional work that needs to done by the runtime like colleting the stacktrace, increase in memory pressure sue to the page faults, etc

There is one catch while using the as keyword though, the as keyword only works for reference types or nullable types, which is understandable since it either returns the casted object or null and there no option to return null in case of failure for non nullable type (value type), it can’t be used there.

In summary, we should try to use as wherever possible as checking for null is definitely preferred as compared to throwing an exception, however if we must use type casting we should catch the specific InvalidCastException for better performance.

Although there is not much to the source code, regardless it could be found at github

Any questions, suggestion or feedback is always welcome.